On June 15, 1953 six town residents met with Brevard County’s local fire commissioner to discuss the possibility of forming a volunteer fire department. At a second meeting on June 17th, the Melbourne Beach Volunteer Fire Department was formed. On June 22, the original six members decided to change the department’s name to the Beach Volunteer Fire Control District.

The Department was formally incorporated in January 1954. The Department’s first vehicle was an Army surplus truck that had been converted to a brush truck. It was provided by Brevard county in August 1953. The first two bays of the fire station were built in 1954 on the site of an old tennis and shuffleboard court. This first station was built with the labor of the volunteer firefighters and funded by donations. Before the station had been constructed, the truck was usually parked outside the home of Paul Earlebach, the Department’s first Fire Chief.

During the early days of the Beach Volunteer Fire Department, firefighting was a very basic affair. Emergency calls were telephoned to a member’s house. That member would then pick up the truck and drive to the homes of other members, sounding the siren as he pulled up the driveway. These members were not provided with any protective clothing and had to fight fire in their everyday street clothes.

The Beach Volunteer Fire Department answered fire alarms both on the beach and on the mainland.

The Department’s members voted to leave the Brevard County Fire Control District and devote its primary attention to the growing Town. The Department’s name was also changed back to the original Melbourne Beach Volunteer Fire Department. The original brush truck was replaced with the Department’s first real fire engine, a 1969 Jaco.

Advances have been made throughout the years with regard to vehicles and other safety equipment. The fire station was added onto over the years to accommodate the growing department and larger Class A pumpers in the fleet. Labor was again provided by the volunteer firefighters.

Ambulance style Utility vehicle was purchased. This vehicle has become a critical component to marine rescue calls as well as rehab and transport functions.

The Department’s mission was expanded when the Marine Rescue Unit was formed.

MBVFD Inc purchased an inflatable AVON rescue boat. Fire department members received specialized training and formed the MBVFD Marine Rescue Unit. This unit has as is called on upon to respond to incidents in the waterways of the Indian River and Atlantic Ocean, providing mutual aid assistance from Sebastian Inlet to Satellite Beach.This Unit also responds to requested assistance by the US Coast Guard in the vicinity. Additional marine rescue equipment such as rescue rocket launchers and rescue surfboards have been purchased with donated funds to expand the Unit’s capabilities and ability to respond.

Initiative taken to procure the donation of a new 50kw emergency generator from Florida Power &amp; Light. MBVFD paid for all the cost associated with housing the generator and installing the electrical wiring to provide emergency power to the Police Station, Town Hall and Public Works.

MBVFD was the first volunteer Fire Department in Brevard County to align its training program to the new State of Florida 160 hour Volunteer Firefighter Course. This was a significant increase over the previous 40 hour curriculum standard.

Purchased an AED (automatic external defibulator) through donated funds to have available when responding to incidents.

A rigid hull inflatable boat with a jockey helm was purchased with donated funds to augment the existing service with an updated boat taking into consideration several important safety features recommended for ocean rescues.

In a coordinated effort with the Melbourne Beach Police Department, produced and distributed an updated Emergency Management Guide and Hurricane Evacuation booklet.

A Powerhawk Extrication Tool was purchased with donated funds and specialized training provided for members in use of the hydraulic tool for vehicle extrication.

Was a banner year as the Department marked its 50th Anniversary. On March 1st, past and present members of the fire department attending a “Building Benediction” Ceremony just prior to the 49 year old station being demolished to make way for the new municipal facilities. The Fire Department sign and American flag were carried over to temporary quarters in the bays of the new Public Works building by founding members Bob Wood and Ken Swentzel. In December 2003, the Town Commission officially approved the lease purchase of a new Pierce Class A Pumper. Also, notification was received that the FEMA Fire Act Grant application, written by the volunteers, was funded. This grant brought in over $100,000 for the purchase of vital equipment for Fire Operations and Firefighter Safety.

After a difficult year of transition, the volunteers moved all the equipment and furnishings from temporary quarters scattered throughout the municipal site into the new fire station in March. The new fire truck was delivered in the summer of 2004. In September 2004, amidst the chaos of two major hurricanes directly impacting the Town, notification was received that the Melbourne Beach Volunteer Fire Department would again be the recipient of grant funding for new radios and fire hose.

Fire Department Corporation purchased with donations a new Kawasaki Mule All Terrain Vehicle for roughly $12000. This apparatus is critical to our ocean and river marine rescue efforts. All assets purchased by the Corporation are donated to the Town.

Town Manager and Town Commissioners approved the purchase of a necessary second Class A pumper.

Possession of the New Class A Engine 258 is take mid year.

MBVFD Inc committed and agreed to a lease purchase agreement to procure a New Ford F550 Squad mini-pumper to the tune of $163,000 over 15 years. This annual payment will be paid for by contributions and donations not by tax dollars. The Squad will be used for fast attack as well as urban interface as it has the capability of pumping and rolling.

MBVFD made improvements to the facilities and applied for Grant support to expand a more than ever needed Wellness and Fitness Program.

<p style=”font-weight: 400;”>Has taken a leadership role in in Marine Rescue initiatives Countywide… coordinating meetings with the USCG and all agencies with Marine Rescue Assets. The goal to be to define common protocols and communications with mutual responding agencies.</p>
<p style=”font-weight: 400;”>MBVFD upgraded their marine vessels with the purchase of a new 19ft Carolina Skiff with a 90hp Mercury outboard. We also designed a custom trailer for quick launches at the 6<sup>th</sup> Ave ramp for any intercostals waterway emergencies. The new call sign for this vessel will be Marine 58 (M58). The total purchase with robust t-top, emergency lights, GPS and needed marine equipment was under $22,000.</p>

MBVFD Corporation made a major donation to the Town with the purchase (nearly $10,000) of new equipment for the fitness room. This goes a long way in the continued investment and promotion of health and wellness for the Fire Department members.

Insurance Services Office, Inc. (ISO), a subsidiary of Verisk Analytics, is a provider of data, underwriting, risk management and legal/regulatory services (with special focus on community fire-protection efforts and Building Code Effectiveness Evaluation) to property-casualty insurers and other clients.  Every few years they come and inspect our FD to see if we meet certain criteria based on personnel training and fire protection equipment.  The inspection of MBVFD went so well that we were able to lower our ISO rating.  The lower the rating, the lower homeowner insurance rates can get.  We were able to lower from a 5 to a 4.  Basically ISO tells insurance providers that based on their inspection they have a high level of confidence in MBVFD ability to provide fire protection for MB, and insurance needs are not as significant as some other towns. 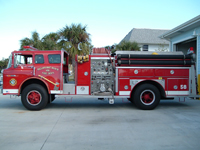 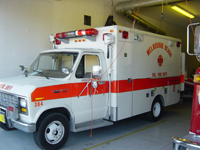 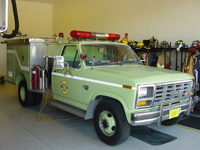 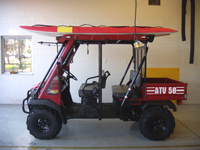 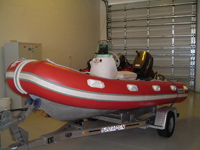 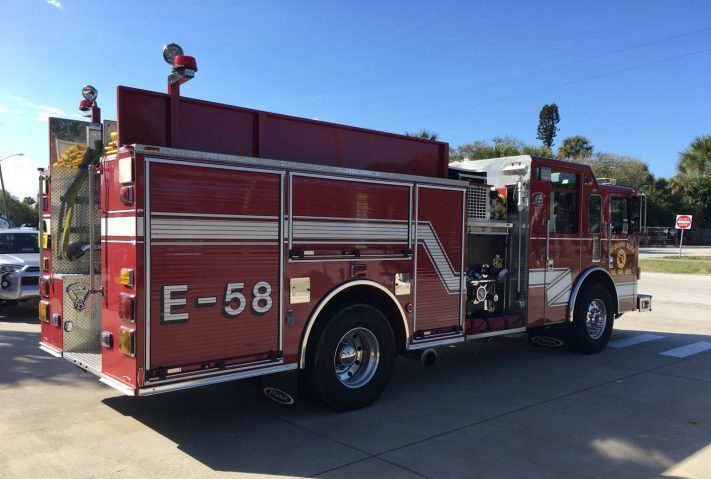 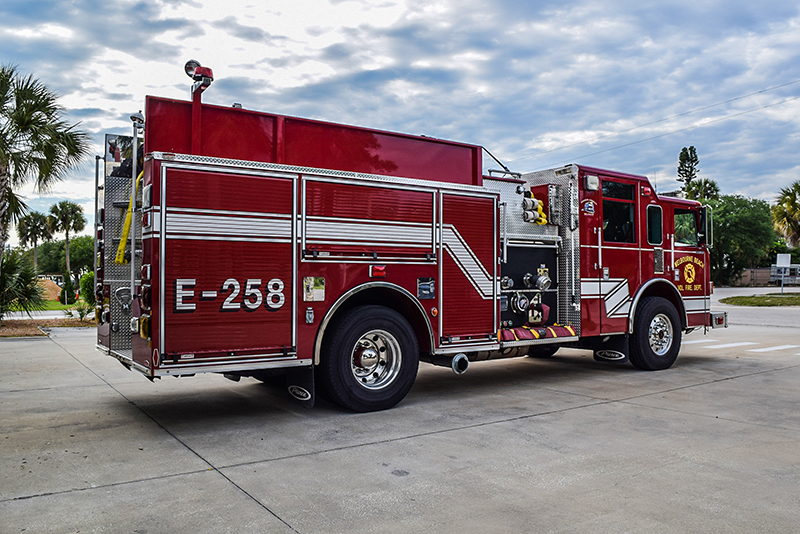 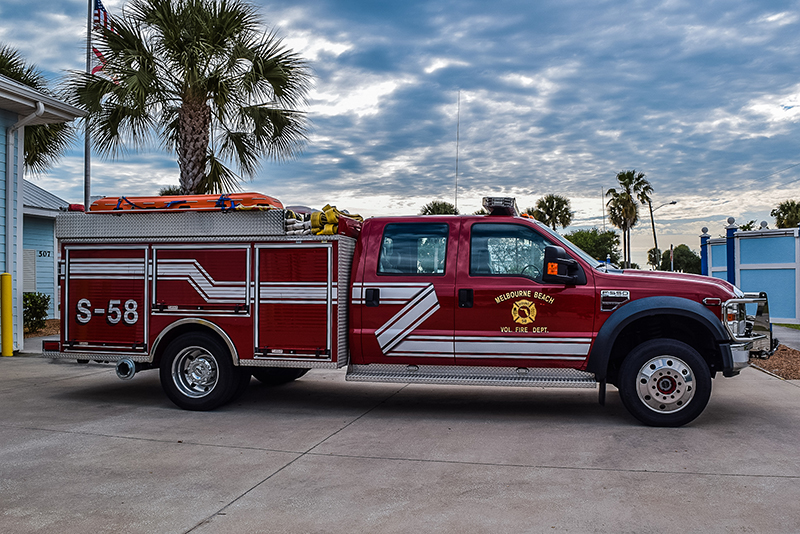 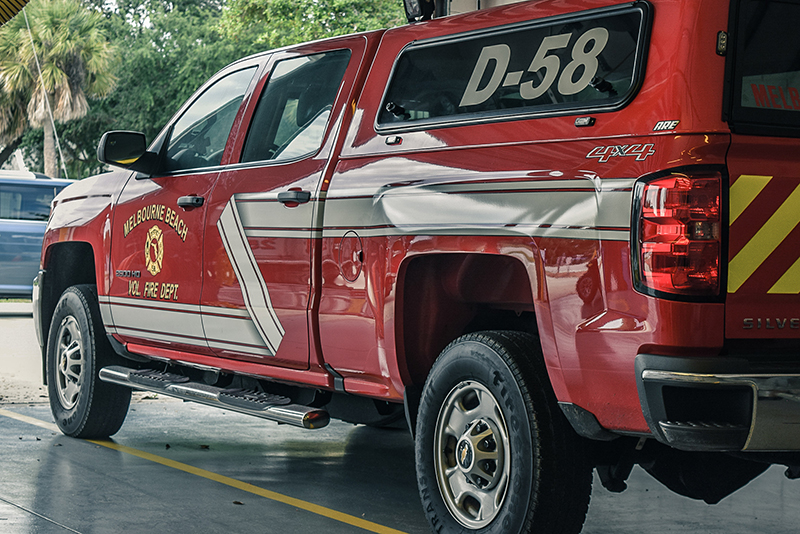 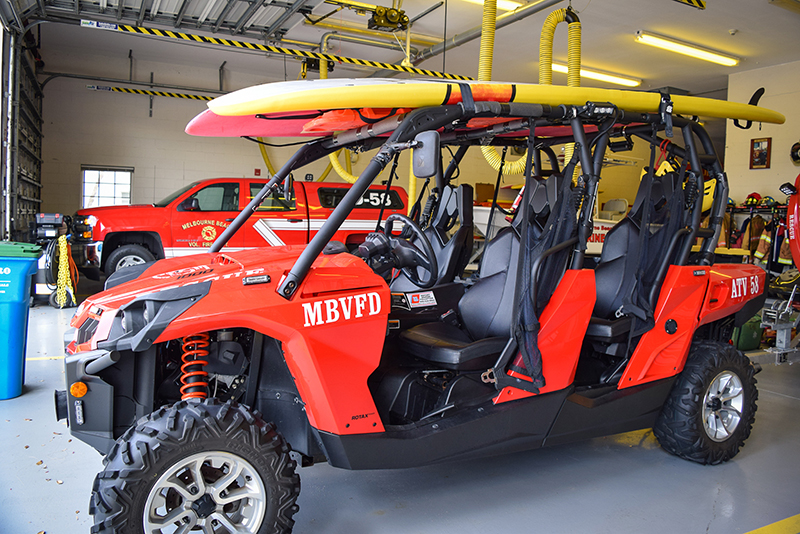 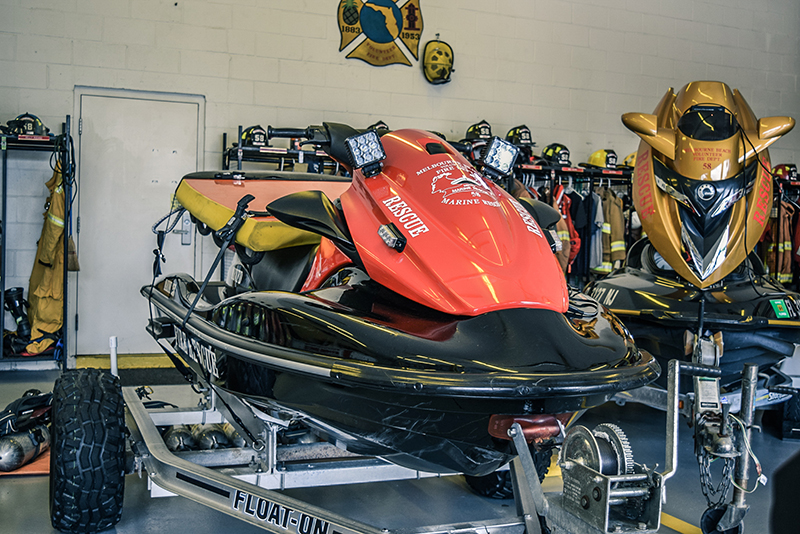